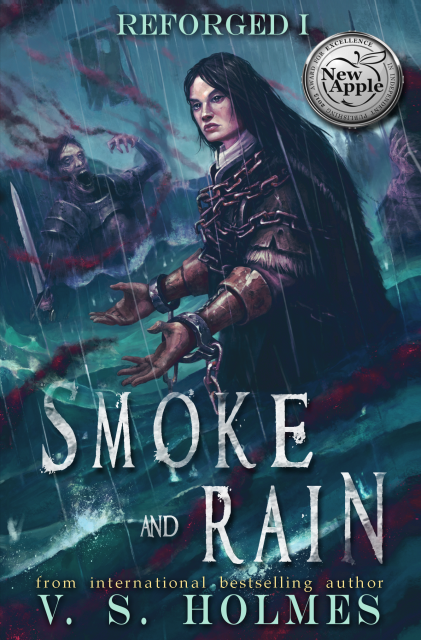 Choose from the first, second, or third book in the Blood of Titans: Reforged series to have me sign and personalize for you or a loved one as a gift!

What happens when heroes are as broken as the world they must reforge?

​A mad king’s genocide destroyed Alea's home and left her sanity in tatters. Caught in the crossfire between the gods and their creators, Alea realizes the darkness inside her is the only thing that can end the bloodshed. Across enemy lines, bastard lieutenant Brentemir Barrackborn is horrified by the blood on his hands. He must choose between the gods he worships and newfound family if he has any hope of redemption—or surviving the war.

“I expected a hero to save us all. Turns out, I was thinking of the wrong part of the story. In the beginning, we aren't saved. There are only fragments and grief. The pieces must be gathered and flames kindled before I'm reforged. I don't know what shape I will take. Those pieces might become a hero...or a monster.”

How can they win a war when their greatest enemies are themselves?

​Blood stains the land. With the gods' desperation, Azirik's mania grows. Away from her newfound family, Alea struggles to control the horrors in her mind and the power in her veins. What she must learn, however, is very different from the lessons the Laen wish to teach.

Stuck waiting in a foreign city, Arman wrestles with new, fathomless fury. Coupled with the inertia of battle, his rage shatters friendships and taints alliances. Lives depend on what they learn, but war does not make time for history lessons.

“Death hurt less than I thought. I wish I could bring that peace back with me. War doesn’t scare me now, or this strange city, or life at home continuing without me. When she brought me back from that beautiful peace, my humanity stayed behind. I’m the only thing that terrifies me, now.”

﻿The war against the gods was just the beginning

Mending the world unleashed chaos. With Alea and Arman gone and the queen dead, Athrolan faces civil war. The kingdom fractures between two heirs—the disinherited and senile Daymir Blackhouse, and the Dhoah’ Laen’s rumored child. Except Alea’s mad son never knew of the power in his veins. Imprisoned in Ban, which teeters on the edge of its own war, his fragile mind may not survive the week, let alone a battle for the crown.

Rih, the soldier who found him and daughter to the Banis emperor, sees more than an enemy in Athrolan, and uses her inability to speak to burgeon her growing rebellion. Whoever runs from the crown faster—and survives their bloodline’s curse—will determine the Athrolani heir.

“I did not appreciate peace until I was rotting in a Banis prison cell. Now I just want to stifle the person crouched inside my head. I left looking for wisdom. Instead, I went mad."