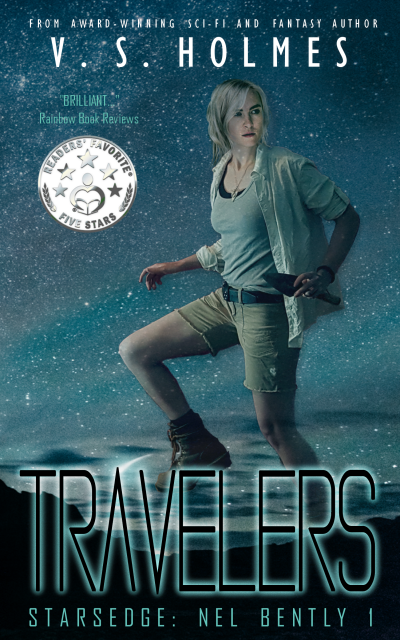 Choose from the first, second, or third book in the Starsedge: Nel Bently series to have me sign and personalize for you or a loved one as a gift!

TRAVELERSNO ONE FIGHTS DIRTIER THAN AN ARCHAEOLOGIST

​Foul-mouthed Dr. Nel Bently has every archaeologist’s dream: a pristine site, new crew, and a private patron to fund her passion for dirt. With her trowel barely into the dry earth of Chile’s coast, however, Nel learns their work is being sabotaged.

The local activists Los Pobladores take issue with anyone brave or stubborn enough to set boots on their land. Nel refuses to give up the site that will make her career to vandals and looters, but she must protect both her friends and her life’s work. With a benefactor playing chess with their lives, radiocarbon dates that are downright supernatural, and angry militants who may actually have a point, Nel is ready to fight dirty.

THE ONLY PERSON ON EARTH SHE TRUSTS... IS IN SPACE

​​Archaeologist Nel Bently left Chile in the wake of murder, vandalism and UFO sightings. She already dreads facing the fall semester without her best friend, but now cops are at her door. Accused of a murder she’s not certain is her fault, Nel has no choice but to run. Following her gut and vague directions from her elusive alien-benefactor-turned-almost-girlfriend, Nel finds herself the target of a extraterrestrial man-hunt.

Running from the law isn’t easy with only her field pack and a handful of scorned exes to depend on. Between starvation, untraceable texts, and a harrowing journey through the wilderness, Nel is forced to question everything about the science she loves and the people she trusted.

IF SOUND KILLS, HOW CAN NEL GET THE WORLD TO LISTEN?

​Archaeologist Nel Bently dreamed of finding a ground-breaking site--she just never thought it would be on another planet. When she arrives on Samsara however, Lin confesses the trip took longer than Nel thought. Two years longer. Throwing her anger and homesickness into her work, Nel wonders if she just made the biggest mistake of her life.

Then one of her team's lead officers takes a walk without his atmosuit. Once again, grief and confusion rock Nel's dig. But this time, she's determined to fix it--even if it means mutiny. Lightyears separate her from home and as Samsara's body count rises, the more it looks like Earth is next.